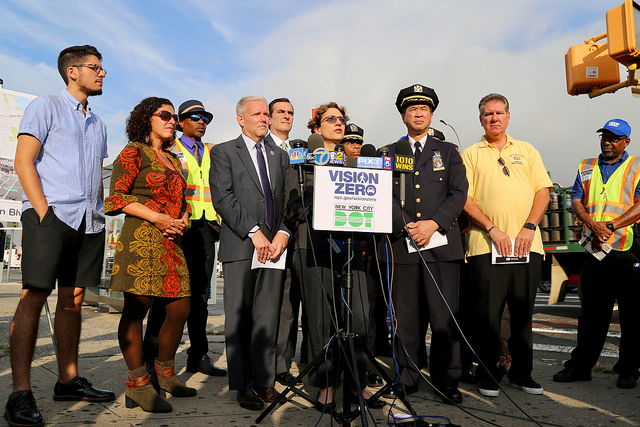 The New York City Department of Transportation today announced that the City would take dramatic steps under Vision Zero to make Northern Boulevard safer. The major street, which extends the entire length of Queens from Astoria to Douglaston, had six traffic fatalities in 2017, and has seen four fatalities so far this year. Department of Transportation Commissioner Polly Trottenberg joined NYPD officials on Walk-to-School Day to highlight enforcement and safety enhancements planned for Northern Boulevard, ahead of a series of community workshops to develop a comprehensive redesign of the corridor.

“Since the de Blasio Administration launched Vision Zero in early 2014, we have made many roadway safety improvements along Northern Boulevard each year, but tragically, this work has not been enough,” said DOT Commissioner Polly Trottenberg. “So today DOT and NYPD are standing together on Walk-to-School Day to announce a strong new enforcement effort. And we will kick off our first work shop next week with residents, elected officials, and other stakeholders to hear their ideas about how we can make Northern Boulevard safer.”

“Saving New Yorkers’ lives, especially when it comes to our most vulnerable neighbors – our children and the elderly – is our top priority,” said NYPD Chief of Transportation Thomas M. Chan. “The NYPD and our partners intend to strike the correct balance between education and enforcement, and we are doing that through intelligent leadership and comprehensive road redesign. Public safety in New York City will always be a shared responsibility with those we serve, whose input into this plan is imperative.”

The elements of the new efforts on Northern Boulevard are:

EXPANDED ENFORCEMENT
Beginning this week, the NYPD will begin a seven-week comprehensive enforcement program going along the entire 11 miles of Northern Boulevard. Called the High Visibility Enforcement program, the new pilot will run from October 1st through Thanksgiving, with each precinct along Northern — the 108,109,111, 114, and 115 — involved in the expanded enforcement effort, which will be overseen by Patrol Borough Queens North.

To supplement the enforcement, DOT/NYPD Street Teams will be placed along the corridor as well. These teams speak actively with drivers about Vision Zero priorities, including the importance of maintaining a safe speed and yielding to pedestrians. Since September, these teams have been going out twice a week, with plans to visit all of the senior centers and all of the schools on and near Northern Boulevard before the end of the year.

DESIGN CHANGES
DOT has already brought a number of safety enhancements to Northern Boulevard, but design workshops planned for October will discuss additional improvements. DOT announced the following design workshop locations this month along the western end of the corridor: