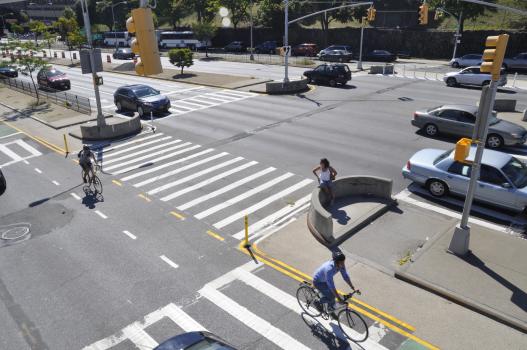 The Department of Transportation is in the middle of an extensive redesign along seven miles of Queens Boulevard, a Vision Zero Priority Corridor as part of the de Blasio Administration’s Great Streets initiative. DOT completed the first phase of the operational project in 2015 between Roosevelt Avenue and 73rd Street. This was followed by a second phase in 2016 (between 74th St and Elliot Ave) and a third phase that is currently being implemented (Elliot Ave to Yellowstone Blvd). DOT is currently exploring the next operational phase in Forest Hills . In addition to analyzing crash data, DOT is asking for the public’s feedback through an extensive outreach process. Help us make Queens Boulevard safer by taking our survey and contributing feedback to our interactive map!

DOT is tackling Queens Boulevard over distinct geographic sections over the next six years. Each of these sections will go through an operational project followed by a capital project. Operational projects are fast, effective ways for DOT to make temporary, in-house improvements to the street with materials like paint, gravel, and flexible delineators. Capital projects take more time to plan and implement, but they create more permanent improvements to the streetscape. During the capital phase, new curbs and surfacing will be put in, along with new trees, plantings, street lighting, etc. DOT will pursue project phasing for the following sections of Queens Boulevard on the current timeline:

- Capital project to be implemented in 2018

- Capital project to be implemented in 2019

NYCDOT is currently conducting outreach for the next section of this crucial project, similar in size to the previous segments. We remain committed to improving safety along Queens Boulevard and are focused on getting insightful feedback from the community. We have a public feedback map and survey, so please click the links below if you'd like to participate! There is a clear and present need for safety improvements along Queens Boulevard; crash data currently places it in the top ten percentile of traffic injuries and fatalities for streets throughout Queens. Check out our Presentations & Data page to learn more background on the Boulevard. In addition to analyzing these figures, DOT wants to know about your personal experiences and perspectives on Queens Boulevard. In order to improve the boulevard for current and future users, DOT needs to hear from pedestrians, motorists, and cyclists. Through workshops, surveys, online interaction, and real-time engagements with the Street Ambassador unit, DOT will inform and educate, as well as listen to, the public about improving Queens Boulevard. Check out our Outreach & Events page to see our past events and participate in future ones.