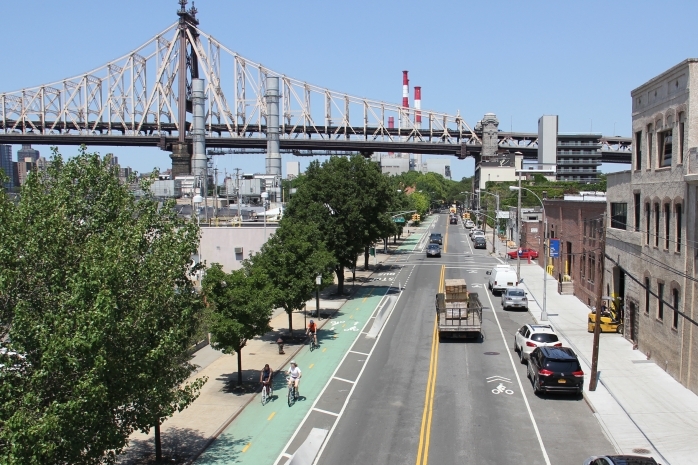 Please sign up to receive project updates and invitations to upcoming events related to the NYC DOT Bicycle and Greenway Program here: https://www1.nyc.gov/html/dot/html/contact/email_signup.shtml

New York City’s Greenways run through parks and along streets, providing safe and accessible green corridors for active recreation and non-motorized transportation. DOT is responsible for the planning, design, and implementation of greenways on city streets.

Greenway routes creating high-quality bicycle and pedestrian corridors that form a key component of the city’s transportation infrastructure.
• New York City’s Hudson River Greenway is the most heavily used bikeway in the United States—nearly 7,000 people ride a bike on the Hudson River Greenway every day.
• The Ocean Parkway Greenway, constructed in 1894 by F.L. Olmsted and Calvert Vaux, was the first bicycle path built in the U.S.
• New Greenway lane miles have been constructed in all 5 boroughs.
• The Bronx River Greenway is 23-miles long and follows the only non-tidal river in the New York City.

Greenways in New York City date back more than 100 years, to the nation’s first separated bicycle and pedestrian path constructed in 1894 along Ocean Parkway, which is still operable, today. Robert Moses included Greenways in many of his plans for New York’s highways constructed in the mid-twentieth century, which include the still rideable paths along the Hutchinson River Parkway in the Bronx and the Belt/Shore Parkway in Brooklyn and Queens.

In 1993, the Greenway Plan for New York City laid out a vision for a system of landscaped paths connecting the City’s residential and commercial neighborhoods to open space and waterfront areas. The NYC Department of Transportation (DOT) and the Department of City Planning (DCP) then produced The New York City Bicycle Master Plan in 1997, which incorporated the Greenway Master Plan’s goal of 350 miles of greenway throughout the city into a 900-mile citywide network of on- and off-street paths and bike lanes.

Today, there are more than 100 miles of completed off-street Greenway paths.

Greenways offer New Yorkers a peaceful break from their busy lives and an opportunity to enjoy landscaped continuous paths within City limits. These linear parks expand open spaces into neighborhoods.

DOT works to build Greenways on City streets and collaborated with other City agencies to elevate the quality of Greenways in New York City. Our goals are:

Take a closer look at Greenways in NYC by visiting the Brooklyn Waterfront Greenway:

Click here for an audio described version of the “Greenways in NYC: Brooklyn Waterfront Greenway” video.